The event was introduced by Catherine Spalton of Wycombe District Council.

Sanjay Poyzer from the Government Digital Service gave a talk about the use of service patterns. 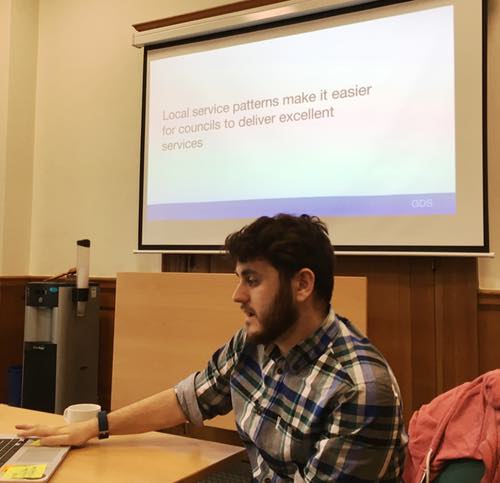 Sanjay outlined the work being undertaken as part of the Verify pilots to introduce service patterns in local authorities participating in the project.

This led to a discussion about the issues and opportunities in taking this work forward:

Ideas of areas where common service patterns would work best were:

This was the first session to allow Peer Group members to showcase any work they felt others would find interesting.

Phil Rumens talked through the various stages of this project to improve the service. This had involved the use of design patterns to improve user experience, as well as iterations on the process model to both meet the requirements and improve its outcome.

Phil also discussed their application of the psychology of rejection through the use of a deliberate delay in providing an outcome to these requests. This gives the impression to users that their request had been fully considered rather than just being a calculated output arising from the data provided, which could encourage ‘tweaking’ of the data.

Neil Lawrence gave some background: the project had originally been set as a one-off exercise to increase online transactions, but has now become ‘business as usual’ with a rolling programme used to help reinforce the idea of routine iterations being a better way of working.

Martin Cliff explained how user behaviour and feedback is captured using Hotjar’s recordings and feedback widget. This provides them with useful data at a fraction of the cost/time of full user testing, and also ongoing information to test improvements and guide future priorities. Using Hotjar had illustrated problems Oxford were not aware of, such as its date picker not working on mobile devices.

An example discussed in more detail was the hugely popular Parking Permit form. Key concerns raised by regular users was that there were too many questions on the form and they wanted an account feature to make completion easier/quicker. This had provided really useful evidence to discuss improvements with the parking team. Rather than being obstructive the team had responded really positively and wanted to go further than the proposed changes.

This was the first Problem session, aimed at using the collective knowledge in the room to help a council find a way forward.

Wycombe had removed the phone number from their website to encourage greater self-service which had led to complaints from customers. A range of service-specific contact forms had been introduced, and a general enquiry form was being heavily used. They were interested to hear how other authorities had approached this. Bracknell Forest also reported they had stripped out emails and phone numbers for similar reasons.

West Berkshire has introduced a progressive Report a Problem form, that begins with general outcomes required and drills down to specifics of the issue to generate the detailed report.

Oxford reflected on a similar response to their stripped-down Contact Us page which has been an attempt to encourage greater self service but accounted for around 10% of all negative satisfaction responses received. A study into the responses and an assessment of user needs had led an assessment of potential options for improvement. The solution that best matched the needs was in use by King’s Lynn & West Norfolk and Oxford are now commissioning them to introduce a similar page for them which will also incorporate a selective web chat option.